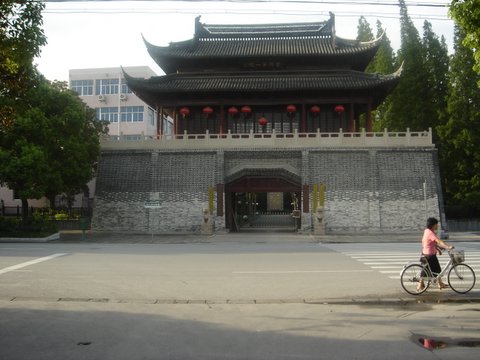 After a long stint in Shanghai, China with a tiptoe into Saudi Arabia and Egypt, I returned to America and woke up one day and had a record label. The following is how this came to pass, how I became associated with Helen Kelter Skelter, Gum and the Feel Spectres.  After I put out my album Tomorrow in Progress, this happened mostly through the recommendation of Trent Bell of Bell Labs who I suppose is our A&R guy though no one really has a title. Titles are so 20th century after all.

But these writings, these blog posts, if I do my job correctly, will be about much more than the label with segues into my time in the Orient. In as much, I feel as if I need to set the record straight about me and my contribution for the last 30 years and counting – or lack thereof – to modern music. Obviously to some, my music is very important, to others, I am just a glitch on the radar. During the course of the blogs, I will be harkening back to the yesteryears of my career as well. At times, I hope to have some guests contributing their insights or their recollections from that time.

Thus, here and there I will go down memory lane, like remembering hearing those first Jane’s Addiction demos being played on KXLU in LA when the first Defenestration record was doing well on the college  charts and us meeting Janes Addiction via phone and knowing we were kindred spirits. Until Defenestration’s Todd Walker had reminded me, I had forgotten all about that. In as much, I am sure there will be varying accounts of the time Tommy Stinson got arrested when Defenestration opened for the Replacements in Norman. Sadly, I have no stories involving Black Oak Arkansas or the Doobie Brothers.

But for now, back to the label – as I said, Trent introduced me to Gum and HKS; two bands that he works with who are his favorite local bands. Upon hearing them, I agreed with him. I love them too.

Let me say the term ‘local band’ makes me cringe since it sometimes rings of amateurish or that band that really wants to play clubs but just has no talent or songs or any reason to be in front of an audience and they beg and beg you to help them but they don’t really understand the whole concept of talent or raw energy or whatever it is that make great bands great bands. Thus, Gum and HKS are two great bands who just happen to be local.

These two bands are anything but the aforementioned local band. I will talk more about them later but just know that HKS are a full on psychedelic assault that wins over audiences every time they play with equal parts Wishbone Ash, Television, Screaming Trees and Nick Drake. And Gum – perfection pop candy – give the best of Todd Rundgren a run for his money. “Hello, It’s Me” indeed. Go Gum! Go!

The Feel Spectres are the brainchild of Matt Goad whom I have known since the early 90s, and was the guiding force behind American Boyfriend a power pop chopped steak. The Feel Spectres, in as much, are best described as the band that show up at Carrie’s prom after running the scheduled band off the road and then playing nothing but 60s beach party sci-fi monster songs with a working class bend, but of course, more about them later.

To get an idea of how Shaking Shanghai happened, follow me to the source, which is, of course, Shanghai. Some may know the story of me dropping out of the music scene going back to college, then moving to Atlanta after graduating perfecting my professional drinking career in the process at my friend’s club there, then moving to NYC becoming an editor at a short-lived online record store and writing periodically for Interview Magazine, then taking an advertising job at Grey Worldwide and hating every minute of it though loving some of the people with whom I worked, then leaving NYC and moving back to OK to become Ferris O’Brian’s partner at the SPYFM when it was part of the Citadel umbrella, then, when it temporarily went under, I moved back to NYC, again,  and lucked into professorships at Laguardia Community College and John Jay College of Criminal Justice teaching courses preparing international students for college English and teaching a film course as well. This all led to Shaking Shanghai in a very indirect taoist way.

At the end of the day, I am a sojourner. And I have been on a great sojourn for the last 10 years, or perhaps that could be pumped up to 20 years. Perhaps my life has been one long meandering sojourn.

After teaching in NYC for a year and a half, I decided I wanted to live abroad, to be an expat, to be Hemingway, Burroughs, or Maugham and live an adventure. This is when the sojourn officially starts. Incidentally, I stopped drinking at the beginning of my second year as a teacher. Before this my adventures had been alcohol fueled, now I wanted to be Heathcliff and leave my Wuthering Heights New York and search for my fortune. I realized my fortune has nothing to do with money – I will talk more about that in a bit. Besides, I had grown tired of winding up drunk and naked at random East Village bars.

Once I decided I wanted to teach abroad, I asked my Lonely Planet editor friend where he thought I should go.

“Go to China,” he said. “Historically there are significant things happening. You will be glad you did.”

I listened to him. And yes, I was glad I did.

But what does all of this have to do with Shaking Shanghai you ask.

There was really no rhyme or reason I picked Shanghai other than I liked the name. It sounded exotic. I had no idea what to expect. After writing enquiries to a few boarding schools, I got a response from a former New Yorker running a boarding school in Songjiang, a suburb of Shanghai.

I wrote and told him I wanted to find my Paris, the way Hemingway, Gertrude Stein and Dorothy Parker had. Whatever I wrote worked. The headmaster was thrilled that I did not give him the same old ‘I want to experience the culture,’ which everyone he had queried had written him. I did want that but that was not my impetus for going. Mainly, I wanted to lose myself in living. I got the job. I booked a flight to Shanghai. Funny thing is, as a kid, I always thought I would grow up and teach at a boarding school on the East Coast after I had lived my rock and roll dream. I never imagined it would be this East Coast.

I wanted to burn my comfort zone, to kick a field goal out of my comfort zone with my comfort zone and therefore destroy my comfort zone. Looking at that time, 10 years later, I am thrilled that I did it and somewhat proud that I was able to do it with no reservations and go full speed ahead with just a few suitcases and a Mandarin phrase book from my friend Meg. Thank you Meg!

This is the thing. When most people move, they rent trucks and / or hire moving companies. I do it a little differently. I just pack a suitcase or two and take a train or plane or hitch a ride with a friend in a car. For nearly 20 years, I’ve lived this way. However, now I have a house and a lawn and a butterfly garden and a car and a garage for my car and my suitcase is unpacked, for the time being anyway, but then that could change. But I digress.

I didn’t know what to expect. My adventure was a metaphoric roll of the dice. I was excited during the flight to Shanghai and I really was not concerned until the plane landed at Pudong International Airport, a district on the outskirts of Shanghai. Horrible scenarios played in my head. Nevertheless once the plane taxied to the gate, I was okay. I was ready to take on the adventure.

Immediately upon going through customs, I realized everyone is friendly. I felt like a welcome visitor. Any residual reservations were gone. I was ready for Shanghai and I felt as if Shanghai was ready for me. And like I said, I will tell you what prompted Shaking Shanghai but that answer will come in time. Take the journey with me. It’s free.

To read the blog that I kept while in China, click on the link below!