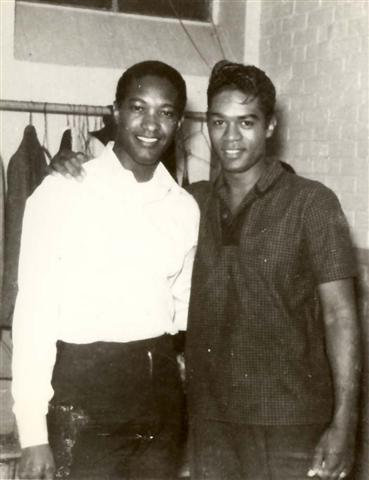 Friday came. That night was to be my show with Rock and Roll Hall of Fame inductee – friend of and mentor to Jimi Hendrix – Billy Davis. Of course, I was slightly nervous. My voice definitely showed signs of wear from practicing with the kids the previous evening. In a rock setting, this would have been no big deal but in a setting where it was just my voice with piano accompaniment I was nervous. Jarrett, who seems to be able to do everything, was to be my accompanist on piano. We had not gone through the songs yet. We were set to do that in the afternoon. On top of everything else, a heavy snow was to fall on Detroit that night. This was a day with a lot of variables.

In the afternoon, Jarrett and I went through the songs. Since we are both professionals, there were only a few glitches. Really, I have to hand it to Jarrett. Not only was he my pianist but the following night he would be the bassist in my band at the UFO Factory. He ran his label as well and he was in college finishing his first semester, which had come to the point of final exams and various essays. With everything that he had happening, he truly is a trooper.

Jarrett and I went early to the church – Assemble – hoping to run through a couple of songs before anyone arrived. No one seemed be there. Detroit was still cold, below freezing. We waited at the gated entrance; knocking and waiting, hoping someone would let us in before we became Motor City popsicles.

Finally a young man named Dylan answered our repeated knocks and welcomed us to come inside where it was by no means anywhere close to being warm and toasty. Later, Jarrett’s friend Lee showed up who had printed the posters for the two shows, posters for that night’s and the UFO Factory show.

Lee went and got us cokes in bottles at a local convenience store. Jarrett and I had picked up Tubby’s to eat at a Tubby’s that did not take Tubby’s coupons. Tubby’s is a delicious steak and cheese sandwich Detroit franchise. Another place that Jarrett had pointed out on one of our afternoon drives. Jarrett had a coupon. Both of us were perplexed when we got to Tubby’s and Tubby’s did not take Tubby’s coupons. Tubby’s, I love you but what the heck?! Take your own coupons.

After we finished our sandwiches, Jarrett being a neat and tidy person threw everything away. Lee returned with the cokes for us. He sat down to eat his Mac and Cheese that he had left on the table in a bag when he went to get the cokes. Jarrett being tidy and all, threw the bag away. Lee was not pleased but definitely a good sport about it.

The grand piano, which had supposedly been tuned recently, had some bum notes, which bummed both Jarrett and me out. It was also placed behind a beam so it was hard to make eye contact with each other. Being professionals, we would get through this though this was not an ideal circumstance by any means.

And then Billy arrived. Gary, Jarrett’s dad, went out to Garden City to pick him up. He doesn’t have a car of his own. When his car was stolen, he got so angry that he decided not to get another one. Billy, who in many ways resembles his protégé Hendrix, walked down the aisle. Walking in, he had star quality. Is it because of the pictures I had seen of him with Barry Gordy, the Beatles, Sam Cooke or was it because he is truly a star? – an angelic being of light passing through our time wielding his six string.

Although I was intimidated and more than slightly star-struck, Jarrett had told me repeatedly how nice Billy is. Billy walked up to me and I introduced myself and, of course, told him how pleased I was to meet him. His demeanor was slightly biblical like that of a kind old shepherd, a kind old shepherd who time-travels to shop at Granny Takes a Trip and any other 60s Swinging London haberdashery.

Knowing I may never get another chance, I immediately started asking him questions.

“I was at the Motown Museum and saw a picture of you and Barry Gordy. You both looked really young like you were 13 or 14. How old were you?”

“I think we were 11,” Billy replied and then added. “You know I saw him recently at some event and he was really nice to me but he didn’t seem to know who I was.”

“Yeah, I think it runs in his family. I knew his people. A lot of them got that way when they got older. He was really nice though, very polite but maybe not all there.”

“And Hendrix? What’s the story there?”
“Well,” he started. “When the Midnighters played Seattle, our trumpet player came back after the show and told me this teenager, this guy, wanted to talk to me but I didn’t want to talk to any guy. I wanted to meet women.”

“Yeah, well anyway, this happened every time we played Seattle. And finally, the third time I said ‘yes, I would meet him.’ And there is this 16 year-old Hendrix. We became friends and I helped him out a bit. He took my place in the Midnighters when I got drafted.

“And the Beatles?” I asked. “I saw a picture of you and the Midnighters (Billy’s band in the 50s and 60s) with them. Were you in England?”

“No actually that was Miami,” he answered. “We were playing a show and there were these guys, these kids, these fans at the front of the stage during our set.”

“They were the Beatles?” I asked.

“Yeah, but they were not yet ‘the BEATLES!’” he added. I understood what he meant. Yeah, they had just taken America by storm but obviously no one could have predicted what their legacy would be by their then current single and first US #1 hit “I want to hold your hand.”

After all, Billy was a co-writer with Hank Ballard on “The Twist,” the song that made Chubby Checker famous.

Then it was time for the show. There were not as many people as we had hoped because a lot of people did not want to brave the impending snowstorm. I insisted to Billy that I play first so that I could really sit back and enjoy his set without worry. Jarrett rose to the occasion and was a fine accompanist for me. My voice was not 100% but at the same time there were no “uh oh, what note is that?” moments. And, at this point, I have done this so long that I am better equipped than I was as a youngster to maneuver around problematic notes.

There was a short intermission before Billy went on. Everyone mingled for a bit. I got as close to the stage as possible because I knew this was bound to be special. And, yes, it was special. I could see what Hendrix saw, what inspired Hendrix as a youngster, why Hendrix wanted to meet this guitarist – and Billy’s beautiful voice, angelic, pure, without affectations. I was completely enthralled and taken to another place. I could imagine Billy playing at these clubs in his youth while the world was changing, growing up, evolving and self-destructing.

Later, after he played, he and I were part of a Q&A that Jarrett hosted. Billy got to talk more about his pal Hendrix then.

“Yeah, when he got famous when I was in New York, he would come and pick me up and we would go riding around in his limo, in the back, smoking and drinking and then stopping at the Cheetah club and then getting back in the limo and riding around New York all night.” Billy nodded his head in remembrance of this as if he was back with Hendrix riding around in that late 60s New York where the kids were swinging.

“Jimi was not a druggie!” Billy emphasized seemingly out of nowhere at one point. He then went on to say how later on when he saw Hendrix he just always seemed sad and Billy did not know why. As Billy spoke, he spoke of Hendrix as a close friend and not as a legend, as someone gone too soon that Billy misses as we miss those who have gone too soon.

From there, he segued into being on the road in Memphis. The story went like this:

“We’re looking for Hank Ballard and the Midnighters,” one of the troopers said with no lack of authority.

Everyone in the audience was on the edge of their seat wondering what was going to happen next. After all this was in the time of segregation and the Midnighters were in the South after all.

“He’s down in that room,” Billy pointed to a couple of doors down. At the same time he said that, he was wondering what Hank had done to alert the troopers. Curious, he listened to the conversation.

“Are you Hank Ballard,” the one of the troopers asked when the door opened.

“We’ve been asked to escort your band to Graceland,” the trooper said. “Elvis couldn’t make it over to the hotel but he wants to meet you.”

“So what about the Manson family member that was part of Hank Ballard and the Midnighters when you reformed in the 80s?” Jarrett asked as any Q&A moderator would who had this kind of information.

When Billy found out who he was, Billy was not pleased especially since Billy was rooming with the Helter Skelter one.

“C’mon man!” Billy told Hank. “I don’t want him rooming with me. He might slit my throat in the middle of the night.”

As Billy told the Q&A crowd this story, he laughed – albeit a bit uncomfortably.