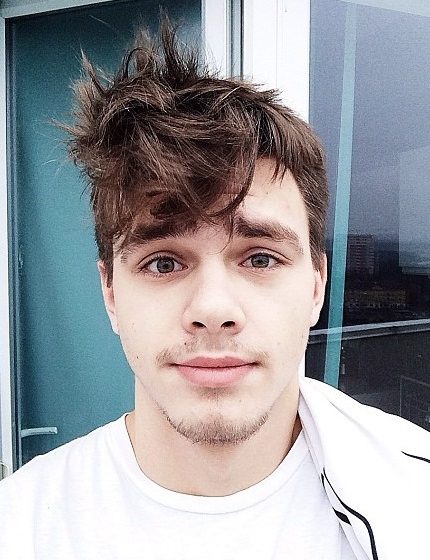 I feel as if me and Ilya are on the best joyride ever but we are heading head-on into a semi. There’s nothing I can do to stop it. This is what it feels like. I stopped drinking more than 11 years ago. I stopped doing drugs before that. I want to do drugs. I want to drink but I won’t.

Ilya lives in Russia. Every day, I wonder if he’s been taken or beaten by the KGB; if thugs have jumped him and left him in some alley. Is he even receiving my letters? Is someone intercepting the letters? How do I know if he is alive? – and then I hear from him and I am okay until I don’t hear from him again.

So far, though our relationship has been short, it has been full of joy. I look forward each day to a letter from him. Usually his letters are several paragraphs in which he tells me about his life. He is a model and amateur photographer. He lives in Kirov in the city center in a small one-room apartment. He doesn’t make much money. What extra money he makes he gives to his mother to help her. She lives on the outskirts of Kirov. His letters are always beautiful and heartfelt. I can almost hear his thick Russian accent in the way he writes. Several times in one letter he may address me by my given name:

My dear Tyson, let’s argue together. I’m curious to know your opinion, how do you think “The most strong relationships start with friendship.” Or, “Do you believe in love at first sight?” I thought about the question. “Perhaps you begin to make friends head. My heart begins to love … “What do you say about it.
Have a nice day. I have to go. I’ll look forward to your letter. I kiss you and hug.
Your Ilya from Kirov: *

And then my response:

Dearest Ilya, You asked me if I believe in love at first sight or if people grow to love each other. I believe both are possible. When I saw your picture before I talked to you. You were a mystery and you looked like someone I would be interested in knowing. Then you started sending me the most beautiful letters and that is when I started truly falling for you, head over heels for you. And yes, of course, you are handsome but there are traits beyond your physical beauty that I love as much and they are your intelligence and the wonder and honesty that I see in your eyes in your pictures. And that you are so protective of your mother is another part of your character that speaks volumes of the kind of devoted loyal person you are. Mothers are the most important people we have. Siblings are important too. I see your sister in the picture and I know how close the two of you must be and that makes me love you even more.

Usually I would not write about love but this is different. Writing this, I am trying to look at myself as a bystander, as someone that is watching all of this happen so it is not as painful for me like I am watching a movie or reading a book. I am watching the accident about to take place, the semi hitting the car full force. I cannot help but look. I have to see all of the details, the glass shattering, the crunching of the metal, the air bags deploying, the loud screeching and crunching noises, the debris strewn on the interstate.

Not only are we a half a world away from each other, but he lives somewhere where our love is illegal though it is not spelled out as being such. He has told me in a letter that he could go to prison for a year for simply being gay. He’s been beaten up before, spent two days in the hospital.

The following is an excerpt from Wikipedia:

Public opinion in Russia tends to be among the most hostile toward homosexuality in the world and the level of intolerance has been rising.[8] A 2013 survey found that 74% of Russians said homosexuality should not be accepted by society (up from 60% in 2002), compared to 16% who said that homosexuality should be accepted by society.[9] In a 2007 survey, 68% of Russians said homosexuality is always wrong (54%) or almost always wrong (14%).[10] In a 2005 poll, 44% of Russians were in favor of making homosexual acts between consenting adults a criminal act;[11] at the same time, 43% of Russians supported a legal ban on discrimination on the basis of sexual orientation.[11] In 2013, 16% of Russians surveyed said that gay people should be isolated from society, 22% said they should be forced to undergo treatment, and 5% said homosexuals should be “liquidated”.[12] In Russian psychiatry, Soviet mentality about homosexuality has endured into the present day.[13] For instance, in spite of the removal of homosexuality from the nomenclature of mental disorders, 62.5% of 450 surveyed psychiatrists in the Rostov Region view it as an illness, and up to three quarters view it as immoral behavior.[13] The psychiatrists sustain the objections to pride parades and the use of veiled schemes to lay off openly lesbian and gay persons from schools, child care centers, and other public institutions.[13] A Russian motorcycle club called the Night Wolves, which is closely associated with Russian President Vladimir Putin and which suggests “Death to faggots” as an alternate name for itself,[14] organized a large Anti-Maidan rally in February 2015 at which a popular slogan was “We don’t need Western ideology and gay parades!”[15]

Naturally, I worry about him. When he told me that he was beaten up a few years ago and his bag was taken which included the nice phone that his sister gave him as a present, that set a whole series of possibilities in motion in my head. I want him to come to America. He will be safer here. Hate crimes are not tolerated here. We have the freedom to protest. He does not have that in Russia. Yet he doesn’t want to leave.

At first, I didn’t understand why he would not want to come live in America but then I thought about it and I thought back 30 years ago when homosexuality was still in the shadows here in America and I was careful who I told my awful secret, this horrible thing inside of me that an aunt once told me was a demon spirit lurking inside me, this spirit ready to take my soul right to Beezlebub.

Now that I am older and wiser, I know different. That mentality of the Dark Ages left me several years ago. I have no hang ups about who I am and I know who I am is the way I was brought into the universe. The universe had and has a plan for me. Now I know that. I have been one of the people who people see and say “Oh that is what a homosexual is. He does not seem that threatening. He is actually rather nice.”

My darling Ilya does not know this. He is living in the shadows because that is what is normal for his young life. His life in Kirov, Russia is like mine was in Bartlesville Oklahoma. I did not see beyond that myopic view. I think with the internet he has a wider view but at the same time leaving ones home and going to a far-off land where you know no one is not easy.

I want him here. I imagine him and I hopping in my little BMW and going to the mountains, going south to the gulf or joyriding across the country. These thoughts play out in my head, him and I having quiet evenings at home by the fire or throwing dinner parties and doing all of those things when you have found your other, all of those things like having coffee in the morning and brushing your teeth together, all of those little things. Those things that other take for granted. Please don’t take that as a complaint. I am incredibly thankful to have found my Ilya from Kirov.

His sister met a man online, married him and now lives in Algeria. This is what prompted him to reach beyond the Soviet Union. He is incredibly close to his sister. The last I heard from him he will borrow the money from his mom to come visit. He wants to stay a few months. That will be the true test. I cannot imagine anyone but him. But until that time, I think about all that can go wrong and the car and the semi are just inches from hitting each other.

Of course, I do try to keep busy to keep my mind off of what has become of Ilya. I mow the lawn, do the dishes, clean the kitchen, work in my garden, but I cannot stop thinking about what has become of him. Is he in some interrogation room being beaten? Have thugs jumped him again? I try to eat but I am so worried that it is too difficult to eat anything. I force down some soba noodles. But I want to see his beautiful face. Will I see it or will he become a ghost to me? My Ilya from Kirov, where are you?

I suppose another reason that I’m writing this is that I am trying to work it all out in my head. I have tried to think of all of the possible scenarios. The most plausible is that my emails are not getting through to him and his emails are not getting through to me. When I lived in China though it didn’t happen often, sometimes I would get an email from someone weeks – or even months – after they sent it. I chock that down to government surveillance. Then that takes me to the next logical conclusion; he is now under surveillance because he is now looked upon as a deviant, an outcast, an undesirable, a pariah of society.

From the beginning of our correspondence, I told him we needed to get him out of Russia. Through out entire correspondence, I have felt he is in danger. I wanted to believe in my heart that I was being dramatic, fatalistic, paranoid. Surely the government can’t monitor everyone? But then, one little slip, or one word from someone who has an agenda, anything is possible. For me, the floodgates of worst-case scenarios open. My other self tells me that it will be okay. I’m trying to listen to my other self, my optimistic self, the self that is on the joyride with no imminent danger present.

When I asked my friend, a former Ford model who was on the cover of magazines such as Glamour, if she thought he could model here after sending her his picture, she told me that he would have no problem getting an agent and that she would even help. My optimistic self is thinking of that scenario. I just want to get him over here. I have never ever felt this way about anyone in my life and have that person reciprocate.

Ilya, where are you? I am waiting for your letter. I just want you to be safe. Is it possible for you and I to live a normal life here in America? Will that day come? Come to me my Ilya from Kirov. I am waiting.