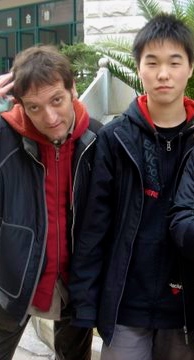 Ten years later, I look back at that time when I first arrived in China, that time when I had no idea what to expect or what was expected of me. Incidentally, I had not scored a job in Shanghai proper but in a district outside of Shanghai – Songjiang to be exact.

Ten years ago, Songjiang was quite a bit more remote than it is now. At that time, a long winding bus ride took you into Shanghai. Now, the metro connects Songjiang to Shanghai and you can ride all the way to People’s Square (City Center) and beyond. Of course, the train went into Shanghai as well at that time but I didn’t know the train schedule. This sort of thing I had to have guidance because everything was written – and for the most part still is – in Chinese characters. Thus when I first got to China, I did not deviate from what others showed me.

I am thankful I began my time in China in Songjiang because it was remote enough that I immediately was thrown headlong into the culture getting the quintessential Chinese experience from day one. Since I had a food card for the school cafeteria, for the most part that is where I ate. In as much when I first arrived, I did not leave campus by myself for a few days. The first time I did was to go to the All Days Convenience Store across the street from the colossal school gates. Everyone in the store was curious about me but was very friendly. After that, I knew I could walk around Songjiang and not be as self-conscious.

In Songjiang at that time, there was McDonalds, Pizza Hut and KFC but there were no Starbucks or any other Western coffee chains. Starbucks, in the future, would become my haven of comfort because they are everywhere now. But for the first year that I was in China, Starbucks only occasionally occupied my orbit because there were only a few of them.

I lived in Songjiang from the beginning of March 2006 to the end of August of 2006. At that time, I transferred to a school on the outer edge of Xujiahui, which was slightly closer to Shanghai’s City Center and actually had a metro stop.

As time went on, I became braver in my travels. At one point, I even traveled on a series of notes three hours away to Moganshan Mountain, which involved the train to Hangzhou and then a bus, and then a Cushman ride to the base of Moganshan Mountain and then a taxi up the mountain. As I said, all of this I did on a series of notes. At one point, a female taxi driver, on the way back from Moganshan to Shanghai, escorted me into the bus station, helped me buy the right ticket and took me out to the bus and sat me down on the right one.

This was a typical experience for me. Most of the Chinese I met, took responsibility for my welfare. This extended well beyond people hosting. This extended to people in the street.

The more remote the place, I visited. The more interested the people were in me and my routine. At one point, I taught at a summer camp at a remote village a few hours away from Shanghai. Here I was put up at a fairly nice downtown hotel. In the afternoon, after I was finished with the English camp, I would wander around the town sometimes just walking along the river that ran through the town or stopping at the small downtown grocery store.

As I wandered around the grocery store looking at the Chinese oddities, I realized I was being watched. Everyone in the store was interested in this strange new arrival. More than likely, most of the people there had never seen a Westerner in the flesh.

Although it was late afternoon and there were not a lot of people in the store, all of the people that were in the store started following me around from aisle to aisle, sometimes picking up and putting down the things I picked up and put down. At first, all of them were tentative and would look as if they were looking at something on the shelves when I turned around, but then when they saw me smile they pretended no longer and blatantly followed me around commenting to each other about what I was looking at. I was giving them an impromptu tour of their local grocer. They were now seeing all of the oddities through my eyes, all of the packaged teas – dandelion, chrysanthemum, green, black, oolong, panda dung; all of the dried herbs and vegetables and even dried seafood. The dried seafood was eaten like jerky. All of this, they saw through my eyes, the foreigner’s eyes, the outsider looking in at the ramen, the rows and rows of ramen.

This incident was the second afternoon after I had arrived for the camp. I realized I had forgotten to pack shampoo. So I grabbed what I believed to be shampoo –  as I previously mentioned everything was written in Chinese characters so even buying shampoo could sometimes be difficult – and headed to the checkout after I decided what I had in my hand was probably shampoo. The funny thing is, the next time I went back to the store every bottle of that brand of shampoo had sold even though there seemed to be several bottles when I bought mine, and still several bottles of all of the other brands were still there waiting forlornly for someone to buy them and take them home. I assume that the small crowd following me bought the rest of the bottles because they wanted to buy what the foreigner bought. Maybe, since there were more bottles than followers, they bought extra bottles to give to friends and relatives. Maybe it’s good luck to buy what the foreigner buys, though, I surmise, there had been no, or at least very few, foreigners in this particular grocery store before.

My students consisted of three girls and one boy. They were all approximately the same age around 15 or 16. All of them had given themselves English names more or less. There was Tess, the studious one who wore glasses and when I tried to speak in Chinese she would tell me – “No one understand you.” There was Ellen who at that time went by Alan. She was a large girl who loved food and who would plan outings for the teachers and her three classmates, outings usually involving food. Then there was Miko, who thought the name she had given herself was English. She was a hipster, or at least on the verge of being a hipster. And then last but not least was the boy, my favorite, Max.

Max was a typical boy. He could have been any ethnicity in his typical boyness though he was definitely Chinese with his spiky thick black Chinese hair that just sort of exploded out of his head with no hair products applied whatsoever. Of all of the people I miss, I suppose in many ways I miss Max the most. We became best pals immediately.

Shortly after I arrived in Songjiang, Max and I bonded sitting together on a bus going to a river town an hour away from the school. Max knew little English and I knew no Chinese. We were sitting next to each other in what could have been awkward silence.

I was sitting next to the window so I watched my life in this Chinese film, unfold before me, the silent pink electric Hello Kitty scooters whizzing past, the 125cc motorcycle taxis, sometimes carrying a mom and dad and child – 4 people on a small motorbike – revved up under all the weight but still zipping along at a fast clip, the occasional farm tractor belching and spitting and chugging along.

There in my revelry, I did not know yet that Max would become my best buddy, that if I was sitting somewhere he would come and sit as close to me as humanly possible without sitting in my lap. Nor did I know the I would read Grimm’s fairy tales to him in the evening on the couch in the teacher’s office – again him sitting sardine-tin close to me – after school with him looking up words in his English dictionary that he didn’t know, stopping me with a “one moment, uh, one moment, uh” to do this. At one point, the headmistress of the school told me that his father had worried about him because all he did was play video games and was withdrawn and talked to no one but he had become my pal and we would become inseparable during my time in Songjiang. He bravely tried to speak English to me and I was always proud and encouraging of him.

Sometimes in the evening we would go to the gymnasium and play basketball. With him, I had truly met my match because he was as bad of a player as I am. This made it fun in its ridiculous badness. If he had the ball and was about to go for the shot, he would then taunt me by picking up the ball, shaking it at me and asking – “You want?! You want?!”

Of course, I would not know any of this this was to come while I was awkwardly sitting next to him with neither of us speaking. As I said, I had just arrived at the school and this was my first outing with the students. Jennifer was sitting a few rows up with Tess. Bird Flu Maureen was sitting a few rows behind with Ellen. Miko had gone back home to Ningbo for the weekend. I looked around the bus and then I looked at Max and he looked at me at the same time. I started to speak but I didn’t know what to say. With that he pulled out his mp3 player and stuck one ear-bud in his ear and gave the other to me.

I told him I loved “Backstreet Boy” and as we wound around the backstreets of China on the way to the river town, I actually enjoyed listening to Backstreet Boys with my new friend Max. Max, the embodiment of sweetness and purity, helped change my life and worldview as I began navigating my daily life in the wilds of the Orient.